The question I get asked the most… I mean, it happens a lot… enough for me to mention it here. People come up to me and they ask: - Mikkel… (or Mike, foreigners often call me Mike), is it possible for a guy – or a gal - to be in the documentary film business without getting screwed? And my answer is always the same. I say, listen, we’ll have to go all the way back to the birth of television. Apparently a young film director had a meeting with an equally young TV executive and the director was really excited because nobody really financed documentaries anymore and here was a mass media with direct access to millions of viewers. Well, the director was showed into a rather large conference room where there was a big mahogany desk behind which seven men in suits looked at him. The TV executive - whom he knew a bit beforehand - got up and shook his hand vigorously and asked him to sit down on a lonely and uncomfortably looking chair in the middle of the room. The film director sat dow
Send en kommentar
Læs mere 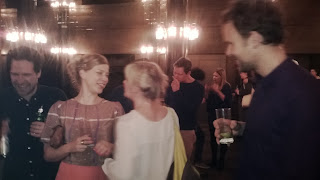 (Possible extract from an impossible book) I tried putting down my glass, but the table was obscured by some pretty, young things who doesn’t really have anything to do with the documentary business but who always show up at parties like this. I wanted to go and talk to the Swedish director  Anna Odell , whom I’d just seen in the crowd, but I never found the courage – partly since the free drinks were over after just one hour. She didn’t win anything at the award ceremony which took place in this old theatre but I already knew that before I left my house. Somehow I must have been included on a mailing list for press releases or something because while putting on my make-up I received a mail with a list of all the winners. Well, award shows are always something you want to get over with quickly if you are not up for anything (remind me to turn the prize down, should I ever get one – films are not a sporting event), and this year the arrangers had wisely decided to show us a short
Send en kommentar
Læs mere

I admit it: after last year’s opening I was really pissed, which you can see  here . The venue this year was the same but this time we got better seats. Still dozens of people had a really, really bad view of the screen but who cares? Fuck ‘em, if they don’t have better connections.  Let’s face it: writing a blog is primarily to promote one self and if you got a bad seat; write your own damn blog. Anywho, at the opening last night the timing of everything was improved and the program went somewhat smoother. Also, after the show, I was recognized by daily newspaper Politiken’s reviewer, Kim Skotte (well, we made eye contact and he nodded - a big moment) and several good-looking women. I had a few drinks and - possibly due to my current high fat/low carb diet - I quickly got in an even better mood, talking to old friends. Minutes later my speech impediments grew a bit more severe than usual, so I decided to go home to get ready for 10 days of documentary film festival while
Send en kommentar
Læs mere
Flere indlæg