- november 29, 2013
The question I get asked the most… I mean, it happens a lot… enough for me to mention it here. People come up to me and they ask:
- Mikkel… (or Mike, foreigners often call me Mike), is it possible for a guy – or a gal - to be in the documentary film business without getting screwed?

And my answer is always the same. I say, listen, we’ll have to go all the way back to the birth of television. Apparently a young film director had a meeting with an equally young TV executive and the director was really excited because nobody really financed documentaries anymore and here was a mass media with direct access to millions of viewers. Well, the director was showed into a rather large conference room where there was a big mahogany desk behind which seven men in suits looked at him. The TV executive - whom he knew a bit beforehand - got up and shook his hand vigorously and asked him to sit down on a lonely and uncomfortably looking chair in the middle of the room. The film director sat down a bit reluctantly and the executive went back and sat in the middle behind the giant desk and moved both his hands outwards.

- These are my associates - and you wanted to pitch something?
- Sorry, but I don’t understand what you are saying. I am here to propose an idea.
- Yes, we call that a pitch. You pitch your idea… you know... like a baseball… to us.
- And then you hit it with your bat?
- Erhm, no. We listen and then respond.
- But isn’t the logical response to a pitch that you hit it as hard as you can?

The executive moved a little uneasy in his leather chair and fondled with his necktie and looked around, while most of the others looked down in their papers.

- Look, we have agreed to take this meeting even though we’re very busy. Will you pitch your idea or not?
- Yeah, it’s just that I don’t really understand the analogy.
- It’s not an allegory. It’s more like a metaphor.
- I didn’t say it was an allegory, I said analogy. And I don’t really think it’s a metaphor either.

The whole board looked a bit perplexed but the first one eventually leaned forward.

- You know, one small push on this button and security will have you out in the street in a matter of seconds.
- Another thing I don’t understand, why am I pitching to seven      batters? It seems a bit unfair not to mention that it weakens  the analogy further.
- You pitch to seven batters… shush… to us seven men... because… that’s the way it is here.
- But clearly, we must be on different teams if this baseball-thing  has to make any sense, and that doesn’t appear to be very  welcoming.
- Who the hell said anything about baseball?
- You did. You said: it’s like pitching a baseball. But I don’t want to be hit out of the ballpark by you guys. I came here to propose to you to somehow be put on your team, so maybe you shouldn’t be the ones receiving the pitch. You should be catchers instead?
- What?
- Yes, in that way we are already on the same team.
- Will you just tell us your damn idea?
- Also, if my pitch is so good, that you cannot even swing at it… if my idea is so novel that you can’t even grasp it or hit it or whatever… then it’s really a bad idea pitching at all, isn’t it?

At this point in the story I have usually forgotten what the question was, but then another fellow comes up and poses the same question, and I just start over… 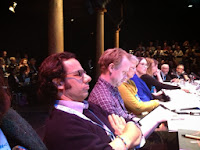