These two pics (taken by my father ca. 1972) were taken within minutes, maybe even seconds. And it’s clearly not the same person. The first one is concerned, maybe even worried to the point of actual fright, and the other is happy and carefree (and obviously not thinking about his teeth) . 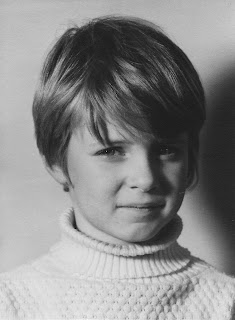 If you ever met me fleetingly, you’d probably think that mostly person no. 2 is me. I tend to be joyful and extrovert at social gatherings and even cracking jokes and the like. To this guy, humorous behavior and endeavor is important and I would really love to be that guy … be him ALL the time, I mean. 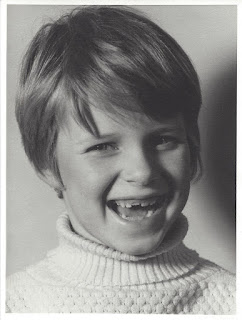 But I'm not. “A mind at ease is the most valuable gift”, as someone said. I do wish I had that gift.

Yes, I am often buoyant and jovial, but sometimes I bitch over things (my closer friends and wife and family will know that) and sometimes – mostly when I’m alone – I’m “concerned, maybe even worried to the point of actual fright” like in the first picture.

When it comes to my work, it will of course reflect my temper and my genuine soul, no matter if I want to or not. Of course, I’ve deliberately chosen to often use humor in my works and not only because I can’t help it, but that doesn’t mean I’m not serious. Being serious is not the opposite of being funny. The opposite of being funny is being self-righteous or pretentious or taking one self too seriously.

Currently, I’m working on a film based on my own film archives and the commissioning editor who is so kind to be supporting the film told me that not many other documentary filmmakers than me (if any) work deliberately with humor as a mean of expression. Later, at an otherwise serious meeting talking about the project she asked after half and hour: “But the film is still supposed to be funny, right?”

Yes, it is. And her remarks warmed me.

Then a funny-serious thing happened at our latest meeting several months after and after I've made a one-hour rough-cut: She said it might be a good idea – if only as a method – to remove some of the funny stuff and see what kind of earnestness the film holds. The funny thing about THAT is that my business partner’s first comment was that the film was somewhat melancholic. But, since my business partner knows me better than the commissioning editor, I probably need to work on my artistic means in that particular film.

So, me being funny (or trying to be) doesn’t mean you won’t experience me being sad, gloomy or melancholic, either in person or in my films, on Facebook, in my piano playing or in my texts. Because that’s also who I am – and it doesn’t mean that THAT fact can’t be funny. And pretentious.
(Moi?)

Afterthoughts: This is of course an amusing lament over the well-known theme of the sad clown. That even if people know the clown is miserable, they prefer him as funny-man, EVEN though they regard the clown being less sincere than the serious side of him. I try to work around that ...

A good mood is no hindrance to to the creative proces, I find, but bad mood surely is. And both moods can be an inspiration.