Over the years I have been frustrated with and curious about myself regarding many things, but I’ve wondered why it is that I more and more tend to favour music with a strong melodic approach and at the same time have become less and less interested in films (and literature) with a strong emphasis on plot and story. Does that make me an inconsistent person or – more likely - a complex and highly interesting individual? 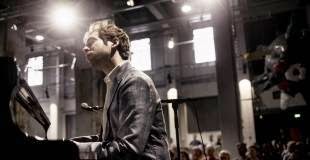 Or is rather because melody and plot are not that related at all? More second cousins than brother and sister? On the surface you would think that the arrangement of notes and/or words in a logically progressing way would be sort of in the same family, but if you think deeper, maybe not.

A melody can be entertaining and have surprises built in, but it doesn’t have to end a specific place. Well, it sort of does, but not in the way a plot needs to be structured. Maybe it’s because music really IS math with emotions whilst words are farther away from arithmetic and shouldn’t be treated as such. Like when you calculate at what page or after how many minutes a certain event of the plot should take place. I mean, a turning point measured out to be after for instance 24 minutes in a film doesn’t make sense if those 24 minutes feels like 45, does it? On the other hand, structure in films is not a bad thing … but I guess what I mean is, that what the plot brings to a film is not the same thing the melody brings to a piece of music.

Like these guys on stage: they start a tune with a terrific melodic theme but soon something else takes over, rhythmic or harmonic or improvisational ideas and changes, and only once in a while does the melody step up again and remind us what started this thing. Jazz have these possibilities.

A film cannot start a story and abandon it … or rather: I would like to see more films do just that … as long as something else steps in and takes its place. The melody can carry through and soar over a jazz tune, but the plot and the story are way too often too important for the progression of the film to be interesting …

And on this happy note I will go out and enjoy some more jazz in the Copenhagen summer – as should you. Stop and say hello if you see me: I’m the one with a beer in my hand, wearing short trousers grossly inappropriate for my age. I should be the only one ...