- oktober 31, 2012
The 10th edition of CPH:DOX is about to start – so happy birthday to them, the staff and ourselves on this versatile and exciting event.


For the second year in a row, the opening was held at Koncerthuset, the fantastic concert hall of the national Danish broadcasting corporation, DR. I had received an invitation – and thank you for that – and was looking forward to the screening of Joshua Oppenheimer, Christine Cynn & Anonymous’s film “The Act of Killing”, produced by my friends at Final Cut for Real. But, but, but… I need to get this out:


First of all: When the ticket says “7 PM, doors open at 6.30 PM”, it’s not okay to let people guess when the event really starts, which proved to be at 7.45. From the lobby you have no chance to see what’s going on inside the hall itself (the place is a complex system of stairs, elevators, aisles and escalators) and no bells indicated when you should actually go to your seat. Some people were trapped in their seats for 40 minutes before anything happened. Just not very service minded - in the opinion of this bilious blogger. 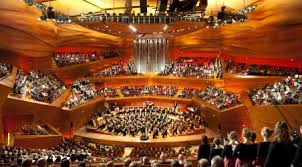 Worse: The place is not suited for film screenings. As the picture indicates, a lot of seats are not in front of the screen (which was where the orchestra usually is situated, up in front of the organ). Last year my view was partly blocked by hanging loudspeakers and microphones, and this year we sat up on a terrace to the side. The  screen was therefore perceived as rhombic and distorted and it was almost impossible to appreciate the picture. Or the sound. I therefore many times during the night regretted I didn't attend another screening of the film (which is great, by the way) in a regular movie theatre.


Maybe, if I was more of a player in the industry, I would get better seats, but it still sends an unfortunate signal of mocking film as art when so many people have such a bad view. Lose all seats not in front of the screen or lose the place as a venue all together.


Also, I didn’t like the wine… none of the five glasses, I had!