If you have seen mine and Bente Milton’s film, ”My Avatar and Me” (2010, 91 min.,), you’d probably say: “What the heck does he know about the nature of documentaries”. I can’t blame you for thinking that, considering the freedom with which we undertook the task of making a “documentary” from the virtual world Second Life. Well, in our defense I can say that we didn’t set out to make a traditional documentary and that the film went through a lot of changes and discussions during the production due to various changes in the financing conditions (of course) and therefore maybe ended as a more fictional piece of work than what at least I myself had set out to make. But as our commissioning editor from ZDF/Arte came up with the term “a documentary fantasy” to describe the film, I was more or less satisfied.

Nevertheless, as the production went on, so did the internal discussions on our team, and as I also appear in the film as myself, I surely had some strong opinions on when to deviate from the truly true events and when to spice up with some slightly more fun details and when to invent completely new stuff to meet the dramaturgical “needs” of the film. But since none of us involved with the film are puritanical towards how to depict reality on the screen, we carried on - and now I can’t even remember in all cases which scenes are true and which are more or less constructed.  And that is just my point regarding documentaries: the use of your fantasy must not overshadow the reality - but surely the reality must not stand in the way of the use of your fantasy!

Anyway, the production of “My Avatar and Me” meant that I didn’t get to go on summer holiday last year and since I am a lazy bum and almost only work to be able to take time off, I was really looking forward to go to Canada on a pure vacation this summer. But just before I left, I agreed to do a favour to a Second Life friend of mine. She is someone whom I have never met in real life, but we meet and talk in cyberspace on a weekly basis. She and her boyfriend were seriously thinking of moving to Vancouver where I was to spend the first couple of weeks of my holidays, so she asked me to take some pictures and upload them.

So there I was, on my vacation and on a bloody documentary assignment… that sounded just a little too much like work J. Well, to tell you the truth, it kind of grew on me and it really had me thinking about the nature of depicting reality and how every little decision, every little light or mood change and every other aesthetic and ethical quirk will influence the outcome.

Of course, my “assignment” was only to make some stills and by nature they are very different from films regarding the sense of time and storyline for example. But on the other hand, even though I don’t pretend to be a good photographer, I like the idea of a photograph telling a story that the photo doesn’t actually tell. Much like I believe in the words (twisted by me) of film theorist David Bordwell: It’s up to the viewer – not the film itself - to construct the storyline.

So I began to enjoy the task: What pictures would my friend “need” to see in order to get an understanding of everyday life in Vancouver? I was looking for people and street scenarios which were true to the image of the city. But soon, you realize that even such a simple task holds a few traps and questions: I could of course only take pictures which I felt were true to the image of the city, but should I only observe or should I interact? Being somewhat erratic in my way of working, I took about a hundred snaps and later uploaded about half of them on Flickr. Allow me to present you with just a few of them.

One Friday night on the underground section of the city’s train system, I saw these young Vancouverites. They were quite playful and highly amiable, so when I realized we were getting off at the same station, I quickly got out and aimed my small pocket camera towards them. As you can see, some of them seem to notice what I was doing but they didn’t really have any time to react. They were on the move and obviously going out on the town. I then made a quick decision and asked them if it was all right to take another picture. Within seconds they arranged themselves as you see in pic no. 2. 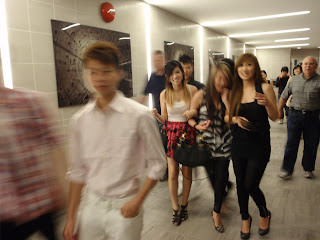 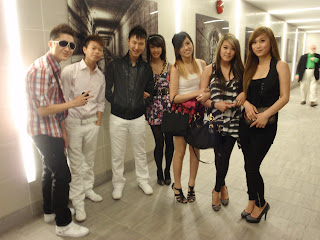 A few seconds later they were giggling and laughing their way out of the underground and left me to ponder. Which picture says more? What do the two different pictures signify? Which one is the best? I agree that the difference would have been greater, if some of the young people hadn’t looked in the camera in the first picture, but I believe that the real differences lays elsewhere. First of all, there are the aesthetical differences. The blur of the movements in the first gives a certain sense of actuality and real-life-motion, while the mise-en-scène of other one clearly implies that the photographer played a greater part. Maybe the one who took the first photo also were on the move, while he could be standing still on the same spot for hours on the other one. So if I go back to my task, which photo would tell my friend more about people of Vancouver? My point is that I can’t possibly know! The first one would maybe tell her that Vancouver seems to be a young, busy and multicultural town – while the other one suggests that the young people of the city are highly media aware and know how to act in front of a camera. Two different outcomes with only slight differences in the actual “bodies” of the photo: it’s more or less the same people at more or less the same time and place. So much for the notion of the true documentary J.
A few days later I took another picture in downtown Vancouver, just on the edge of the so called Gastown. I fell for the contrast in architecture and the interesting lighting situation. Also, I can honestly say that homeless people are a recurrent image in the streets of downtown Vancouver, and therefore this picture is a comment to that fact as well. 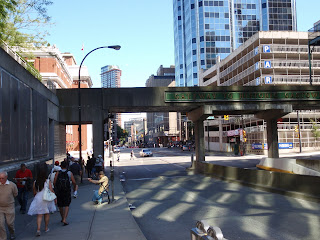 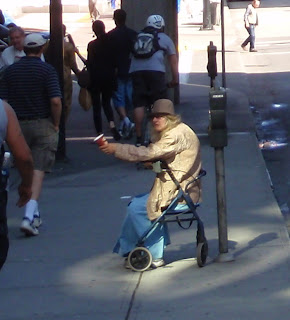 Now, here’s the interesting thing: I can’t for the life of me remember if I saw the beggar sitting there almost in the spotlight before or after I took the picture. I like to think that I did of course, so I could boast about my skills and my total control over my own communication intentions, but I kind of lean towards that I didn’t see her before I pressed the button. As a documentary director I find this intriguing: that luck plays such a huge part in what we do and that there is no shame in that. But of course you have to give Lady Luck a chance to help you.

I think my Second Life friend has put her moving plans on hold for a year or two, but I don’t think it has anything to do with the last picture (pic 5) which is taken a good day’s ride north of Vancouver. I post it here as yet another example of how to approach reality as a documentariste. There is no doubt that the protagonist of the photo (yours truly) is in Canada. The sign looks very authentic (and it is) but what is really going on in the picture? Is there a bear somewhere in the vicinity? Is the guy nervous? Has he heard or seen something? In any case, he seems to be alert. The truth of course is that we took at least two more pics (unfortunately I deleted them) where I didn’t have the right look on my face or where the sign was cut or the rest of the group were visible in the background. But is the picture still depicting reality then – with all the careful re-takes? I think it's safe to say yes… but I agree that the pic moves the story further away from the bare fact that you could meet a grizzly bear at the location (which is frankly not something you should take lightly). 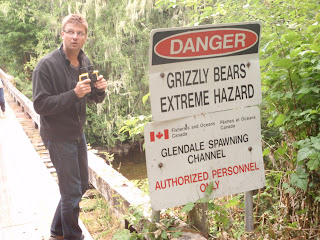 So what I wanted was not just to tell the viewer that this is bear country but also to give a sense of the light tension you could/should feel when you are in such a place. So I took it on me to play that part  - and that sort of gets us back to “My Avatar and Me” and the myriads of filmic strategies we used in that film. I don’t really find any of the above mentioned methods more interesting than the other, but I do sport the notion that in the huge gap between observational or journalistic documentaries and pure fiction there is a wonderful playground to bask in. And why make pure fiction when you can do all this with real life and get away with it?

And let me just quote Danish classical composer Poul Ruders: “I make music to entertain, enrich and disturb”. That’s exactly how I feel a depiction of reality should be!
Of course, feel free to feel otherwise…

PS. “My Avatar and Me”tv-premiered on ARTE and ZDF in the spring of 2010 and will furthermore be screened on IDFA (Amsterdam), Nordische Filmtage in Lübeck and at MediMed in Sitges in the fall 2010. Danish premiere in 2011 will include simultaneous screenings in 40 different movie theatres in “real life” hooked up to movie theatres in Second Life. Follow the film here on Facebook: https://www.facebook.com/home.php#!/MyAvatarAndMe

documentaries documentary Mikkel Stolt My Avatar and Me